Actually written on a Friday night…

1. Guys, I bought a snowboard.

I know, I’m like, the coolest person you know now, right? Sorry to all of your other friends.

I already sticker’ed it up real good.

Now I just need some boots, and some more money so I can hit the slopes sometime soon.

2. (Do you like these numbers? I think it exemplifies my utter coolness. Nay, geekiness.) Whit and I watched Bridesmaids last night. I always thought it looked raunchy, but gave in because so many people have seen this dern movie (yes I grew up in the south), and immediately felt regret when the opening scene was a sex scene. Freakin’ R-rated comedies. It got better, similar to the Heat and This is 40.

But at the end of the movie, after laughing my pants off throughout, I had a realization: They (movie producers) don’t spend money on PG-13 movies anymore. It’s a shame. It’s either CGI animated snowmen, or Paul Rudd and Jennifer Aniston with laugh-out-loud humor littered with trashy jokes and the F word one million times. Not “so be it.” Can we get some PG-13 rated quality movies up in here?? What happened to the Sweet Home Alabamas of the world?

3. Beef & vegetable soup, Whit’s mom’s recipe. So healthy (tomatoes! carrots! potatoes!) yet so delicious. And it was ready when I got home from work today!

Real life: I thought I would make the soup last night, but thirty minutes before “dinnertime” I read the directions to slow cook the soup for several hours. Oopsie. And the meat wasn’t thawed anyways. Leftovers it was. Then I broke a glass as I was walking past the kitchen table. I literally barely glazed my hand over it. But glass cup + glass table do not mix as friends. Thirdly, I just remembered as I was typing this that I forgot to add the lima beans and peas! Better luck next time.

4. I can barely contain my excitement over the birthday trip I’m planning for Whit!! We normally don’t spend that much on each other, $100 per birthday. (That is a lot to me, but some people spend much more than that on birthdays.) Anyways, Whit’s birthday is in March, and he loves to ski, so every year I think I should plan a ski trip for him. The problem is that with both of our lift tickets and my equipment rentals, plus a bunch of driving, it ends up being too much slash not worth it.

Then, yesterday I realized that since this might be our last year living up here, and we have been wanting to take a trip up north for awhile, I should make it happen for Whit’s birthday!! We can use our vacation money for most of the cost, and put his birthday money towards it too. It will be a surprise because of course, Whit likes surprises but I do not. I almost spilled the beans last night when I was asking him if he had any ideas for his birthday and whether or not he’d be okay if we spent extra money on it.

So, I’m planning a ski trip to Vermont!! I’m soooo excited! We’ll stay in Burlington, where Phish is from. Friday night we’ll go see a band at the bar where Phish started out, and Saturday we’ll ski. Sunday we can explore the area more and go to the Ben & Jerry’s factory tour (it was also founded in Burlington). I started asking for recommendations from other Phish fans, and I got a million and a half amazing ideas. Add to that that I looked up the travel time, just to double check, and it’s definitely seven hours away. So I decided to extend the trip by a night. Then my amazing friend Audrey told me she thought she was a living social deal for a Vermont ski trip. Turns out there is a beautiful resort & spa right near Burlington, on sale for $99 a night – including breakfast and this hot tub!

So Monday we can eat at more yummy gluten-free friendly and sustainable restaurants, and check out the Magic Hat brewery tour, and maybe go to the Burton flagship store (see above picture).

5) I felt more guilt today than I thought was possible over an internet conversation – with strangers! I said something that may or may not have made me sound a little stalkerish and creeped people out. It may or may not have been related to #4. Okay, the thing is – who WOULDN’T ask where their all-time-favorite musician’s favorite hang-out places are, when they’re going to his hometown?? Just on the off chance that you could run into him and maybe take a picture together and be best friends forever? Especially when other fans post all the time that they saw him tonight at so-and-so cafe, and wasn’t he so cute playing games with his daughter. I don’t think that is creepy, I think that is normal. Please tell me I’m right!

I will not lie to you, I did feel a little creeperish writing to see what times would be best to go to the recommended cafes. Because what good is knowing where the guy goes if you don’t know when he will be there? Am I right? Seriously, am I a stalker? The problem is that his wife is also a member of the Mike Gordon Fan Club. She said, and I quote, “Sydni, when exactly are you coming? I’ll make sure to tell Mike to mix up his routine.” Smiley face. {He is quite predictable apparently.} I think that she was joking ? But maybe she was also creeped out ? Who knows. P.S. Phish fans are the biggest feelers eveeeeeeeeeer. And I’m not. So that doesn’t help matters.

Anyways, I felt soooo guilty about it because 1) I don’t want to be perceived as a stalker – especially when that is not my intention. 2) I really want other Phish fans to like me. 3) I really don’t want Mike’s wife to be mad at me. 4) I really, really don’t want Mike’s wife to tell him and have him think I’m a stalker. That would be the worst ever. I think I care too much about this. Alas, how do I stop caring so much?! And more importantly, how do I stop having such a humongo crush on this stud:

If that didn’t do it for you, or if instead it sounded like this to your musical-goodness-virgin ears, check this: 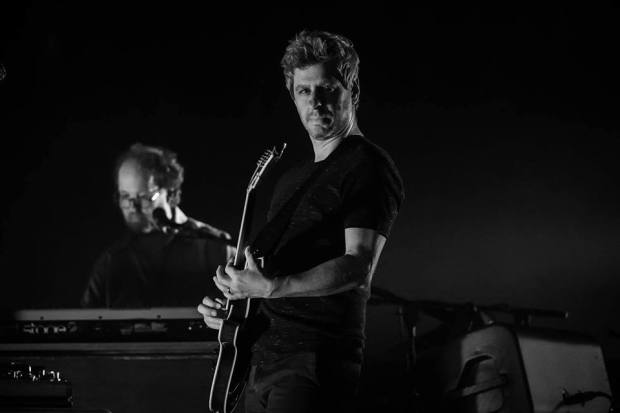 With that photo concludes my ramblings for tonight. Or this morning. Or it’s a snow day so who really cares what time it is or when I wrote this. Bye now! Later days!

[Editor’s note: Welcome to Sydni: Unfiltered. Hope you like it.]